Want to hear more about agriculture, food, farming and ranching? Be sure to follow all of my posts and updates on my other blog AgricultureProud.com or on Facebook and Twitter.

At first glance, I thought this had to be a joke. A listing on the Montana Running calendars was titled the "Pony Trot". Oh, that's a cute name. But, It was only $20 and I had yet to explore much south of I-90 and Three Forks, so I thought, why not?!
I haven't been able to do much running since my car wreck at the beginning of June. I took a few weeks off and have been running a bit on roads around the house; flat, with soft shoulders, and at a noticeably slower pace. I'm ready for another run, to get out of town for a day and see a bit more of the country. So I signed up for the Pony Trot in Pony, Montana this past Saturday and took off before sunrise. It was perfect timing too, as we've been collecting smoke/haze from the massive Carlton Complex fires, which are now ranked as the largest wildfires in Washington state's history. We've been socked in with a low, smokey ceiling and I was glad to see blue skies as I drove south.

The description for the race stated "the course is hilly, so don't expect to break your 10K record, but you will have great views." I thought a few hills wouldn't be bad, right? So I opted for the 10k route instead of the 5k. What I failed to note is, just how close Pony, MT is to the base of the Tobacco Root Mountains...
Yep, "great views" alright! Once you get to the top of the mountain...
Let's just say, it's amazing how much conditioning a person can lose with a few weeks laid up. At the start of June, I ran up Buffalo Jump on a 10k fairly easy. And I figured with the weekly miles I've been putting in, that I could make it through this 10k. Well, safe to say, this is the first race where I have honestly, dreadfully wished I had just turned around and walked back to the finish line.
The climb on this hill was something I wasn't ready for. We started at 5,452 feet in elevation (note, I've been running at closer to 3,500 at the house), I ran a decent, well-paced, flat first 1.5 miles, and ended up at 6,233 feet 0.5 mile later. I wasn't ready for it. Everything from my ass to my ankles was aching by the time I made the peak. All the way up I was thinking about all those folks who took the flat 5k route down at the bottom of the hill. They were just about finished by the time I was looking at the water station at the top of the hill. I was looking for any and every way to curse those rocks and slick gravel beneath my feet. At least I wasn't the only one walking...
But once I got to the top, it really was some awesome views. Even though there was a little haze and smoke in the air, I could see straight across the Tobacco Roots, even to the peaks still covered in ice this late in the year. We were running on some old mining trails that were well-worn and spotted with grass, weeds, and regrowth after all these years of abandonment. There were plenty of wildlife tracks and marks of those passing through. Once we made the top of that initial hill, the next 4 miles were a steady decline to North Willow Creek (pronounced crick, which is the way I just typed it. Montanans are rubbing off on me), which we followed until we found the two-tracks back into town, ran back past the abandoned 19th century bank building, and finally back to the park where we started.

Although this race was by far the slowest pace I've ever run, I did finish the run with my fastest mile. And I realized this 10k climb was a bit much for me yet. But I had fun. Most of the people who showed up that Saturday morning were locals of the small town farming/ranching area. They were a great bunch to talk with and I had several inquiries on where they could get their own Team Beef Montana jersey like I was wearing.
It certainly was a Saturday morning well spent and I had the opportunity to meet some folks and see some views that I would have never had the opportunity otherwise, had I not joined the morning run. Next time, though, I'll be more prepared for that dang hill! 59 days until the Ragnar Relay.
Posted by Unknown at 10:25 PM No comments:

5 miles and a rainy day

So far this week, I've literally been on the struggle bus. Monday and Tuesday just haven't been the productive work days I had planned and I'm not sleeping well, so I had all intentions of tightening the laces and hitting the road as soon as I made it home today.

Well, that didn't quite happen as I had planned. Just as soon as I made it home, yet another thunderstorm for the day plowed through the Valley. I'm sure as hell not going to complain about the rain, it's badly needed as July is one of our wettest months, but it sure would have been nice to hit the track earlier. So, after a light bowl of bean salsa, I hit the road just after 8:00. I had scheduled a 12:00 test run to correct my training intensity. My first mile was good, but the energy didn't last long. So I pushed along and took on a few extra miles. The fourth and fifth miles were much better and just what I needed to clear my head. Which is what I'm up and around with the writing bug at 10:30 at night. But when the moment strikes... I better take advantage of it! 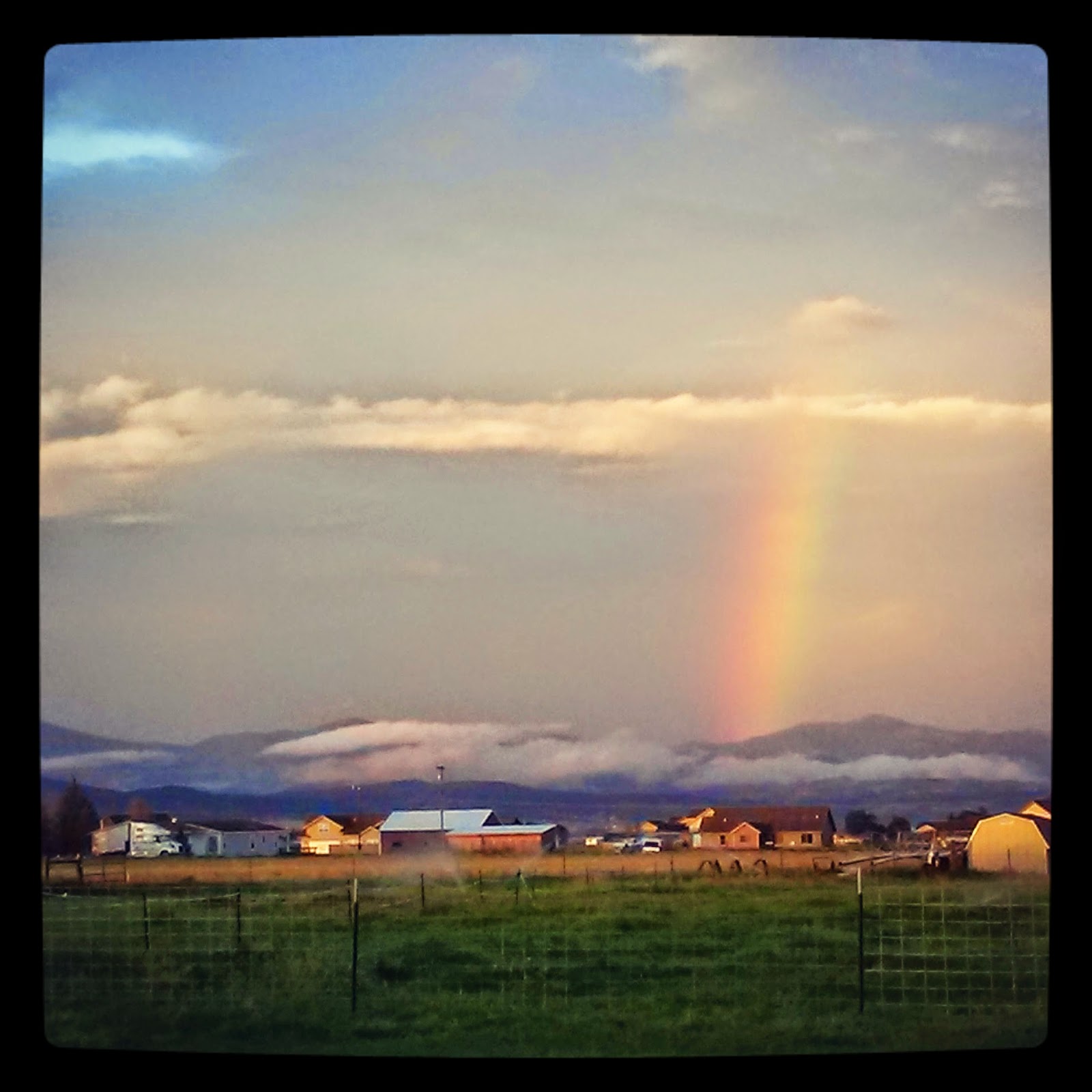 Plus, I guess an added benefit of a stormy day was the shadows and skyline cast by the setting sun this afternoon. There's always a silver lining on the horizons around these parts! Today's run: 5.05 miles in 45:55. 65 days until Ragnar Relay! 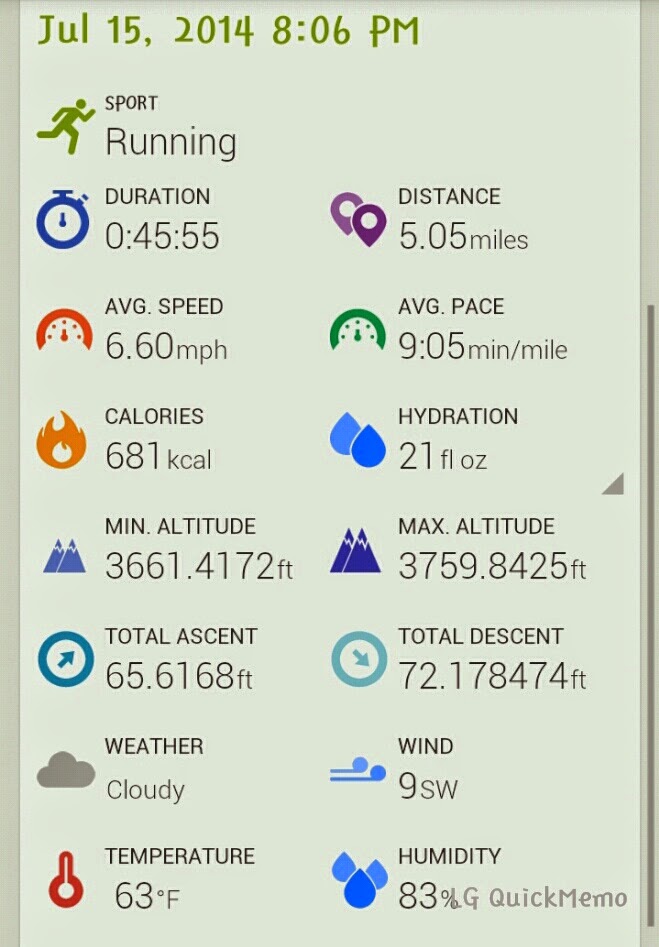 After taking the past two days for rest, I really had some steam to burn off. This morning, bright and early, I caught up on the two miles I was supposed to do yesterday, I kept my pace much better than previous runs earlier in the week.

Then, late this afternoon, I had to get in my long run for the week. #Exhausted. I went to the gym, partly because it was in the mid 90s this afternoon, and I didn't want to run on pavement. I only slowed to a fast walk at the half mark of 3 miles, then continued on to complete 6 miles. I'd say it was a well-accomplished task. The last 10k I ran was 54, so I added a few minutes, but I'm just excited to have accomplished it.

I also used the bike to warm up and cool down, adding another 3.3 miles to the chart today to finish at 11.68. It was a good hard day, definitely a step up from what I've done in the past month, but it was great to clear the head.

There was also a bit of time for reading on The Big Burn. I'm 100 pages in and its starting to get really good, but then I couldn't keep my eyes open. What is it about Sunday afternoons that brings on the naps? I'm not complaining though, seeing as I passed out in the lawn chair (more like recliner) under a tree in the back yard. With the irrigation sprinklers going, it made for an awesome snooze. I'll have to fit a few of those in more often! 67 days until the Ragnar Relay! 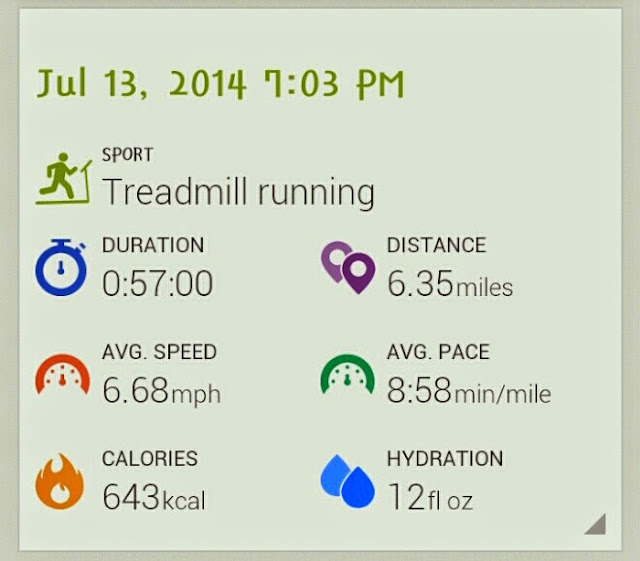 Posted by Unknown at 9:48 PM No comments:

Every Mile A Memory

No run today. But definitely a few moments worth sharing. Irrigation season carries on. But what you don't see is all the mosquitoes that will try to eat you alive... 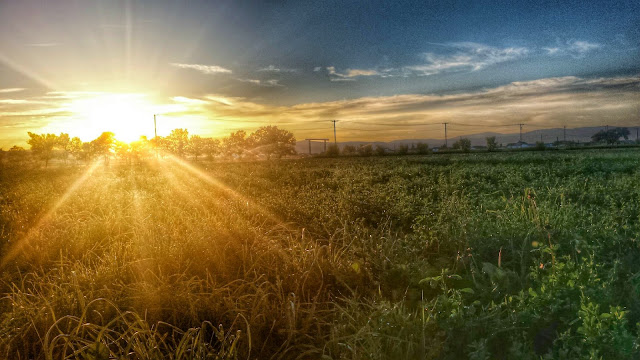 Posted by Unknown at 9:26 PM No comments:

Just what I needed after a long day at the office. I had a lot of reading to catch up on and not a lot of time. Plus it was a bit of a stressful day, so I really enjoyed that my training plan just called for 2 miles in today's run. I hit the first mile in 6:58 and definitely slowed down to enjoy the pace back to the house on the return. It's amazing what an injury and month off will do to conditioning.

My physical therapy sessions usually include a good piece of conversation while the ultrasound does its magic on my neck and back (crossing my fingers that these muscles repair themselves soon!). In earlier sessions we have discussed how growing up on a farm/ranch usually leads to a stronger immune system. Today, that conversation turned into the burden we feel to eat "real" food. I'm always puzzled by how people define "real" food, so I asked. The answer is always different.

That turned the conversation into a discussion on the use and relative concentrations of hormones/antibiotics in cattle ranching today, how eating fewer processed food makes us "feel better" and whether or not cattle are supposed to eat corn.

By the way...
So that got me to thinking, every health and fitness site I go onto these days has a different methodology for eating healthy and eating for a better lifestyle. It makes sense that athletes and active people are concerned about our food supply and individual choices. I'd love to hear more on these decisions and personal choices. 70 days until Ragnar Relay. 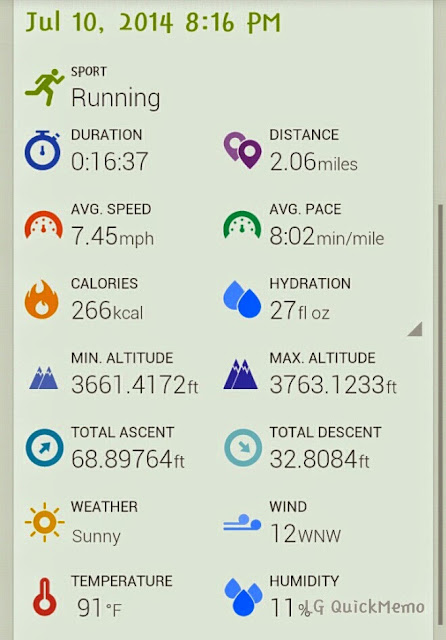